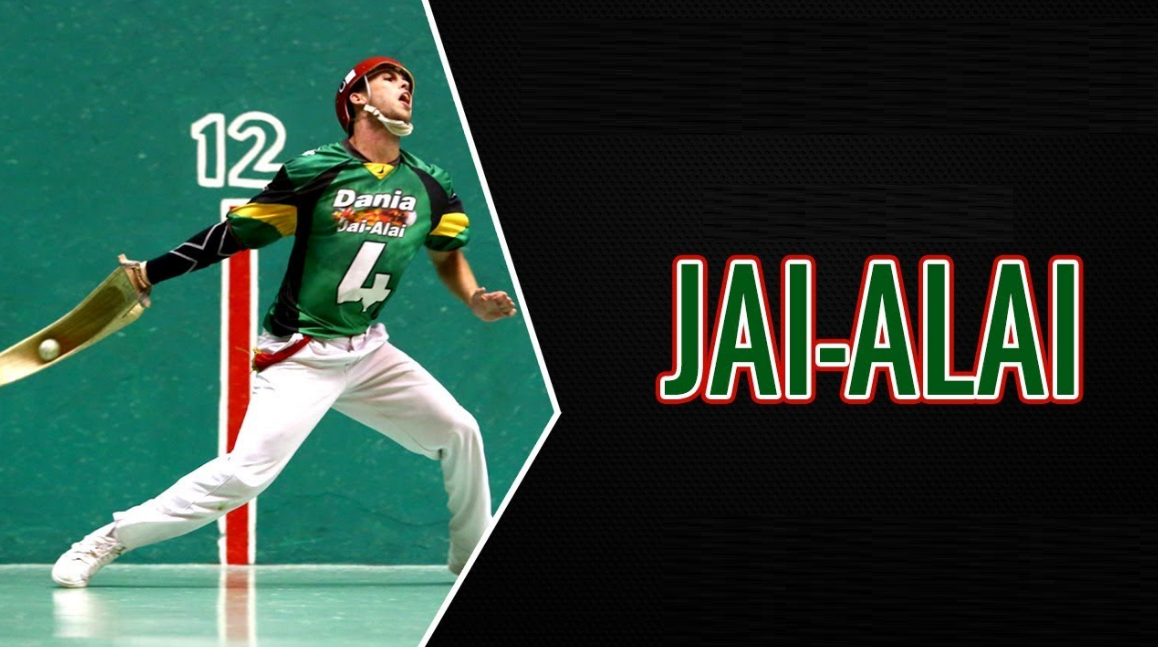 During my time in Tijuana, Mexico, one of the things that caught my eye (besides all the dead dogs and cholos) was a huge, almost palatial building in the middle of downtown. The plant looked as if it were transplanted from Morocco and out of place in the brown and dusty ugliness of Tijuana. “Jai Alai” was written in big red letters on the building’s front.

Unaware of the meaning of those words, I asked the locals what the building was for. I was introduced to the intriguing and tradition-rich game of jai alai (pronounced Hi-Lie). Known as the “fastest sport in the world,” jai alai involves men with weird basket hands whipping a rock-hard ball against a granite wall while trying to make their opponent miss the return while avoiding being hit by the speeding bullet themselves. The game requires a combination of skill, speed, and acrobatics. Check out this primer on the intense and manly sport of jai alai if you’re not familiar with it.

Jai alai is a handball game that originated in the Basque region of Spain’s Pyrenees Mountains over four centuries ago. In small villages, games were played on Sundays and holidays at the local church, hence the name jai alai, which means “merry festival” in Basque. The open-air church courtyard and the walls of the church would serve as the front or arena. The game even has a patron saint-Saint Ignatius Loyola, who played the sport when he wasn’t establishing the Jesuit order.

The players started to put leather on their hands to protect them from the hardball that they used in the games. At the end of the 18th century, they moved into indoor frontons. During the late 1800s, a Basque farmer came up with the idea that if they put a Cesta, or basket, on their hands, they could throw the ball a lot faster and harder.

The game spread to and gained popularity in Spanish-speaking countries like Mexico and Cuba, and even the Philippines. Americans got their first taste of jai alai at the 1904 St. Louis World’s Fair. After its initial introduction in the U.S., frontons started going up all over the country. Watching the “ballet with bullets” in jai alai arenas quickly became an alternative to horse and dog racing for parimutuel gambling.

Jai alai’s popularity declined during the 1980s. Many of the jai alai frontons in the United States closed. However, the game remains popular in Florida where six frontons still attract old spectators and gamblers wearing straw hats and guayaberas and drinking cheap beer. While the majority of players in America hail from the Basque country, where they learn the sport at a very young age, a few Americans have proven their prowess on the court.

Over the past few years, jai alai has gained more attention and is making a comeback. Maybe it’s the Dos Equis commercial with the Most Interesting Man in the World playing jai alai! St. Petersburg, FL recently opened a jai alai facility to train new players. There are plans to open jai alai frontons in Dallas, TX, and Hartford, CT. Will there be more frontons across the country? Are we going to see fans flocking to them to bet on the fastest game in the world? Maybe so. Horse races are fun, but watching a ball being hurled at 170 mph and men diving to the ground and running up the wall to catch it is equally entertaining.

How to Play Jai Alai

If you decide to try out the fastest game in the world, here’s an overview of how it’s played. After watching a few matches, you can quickly pick up the finer points and rules of the game.

The uniform. The players wear sneakers, t-shirts with their post number on the front and their unique number on the back, white pants, and a red sash around their waist, called the faja. Since 1968, when a professional soccer player spent 6 months in a coma after getting hit in the head with the ball, players have also had to wear helmets.

The pelota. In sports, the jai alai ball is the fastest and hardest. As hard as a rock, it has been clocked at speeds up to 188 mph. The ball is about ¾ the size of a baseball and is constructed of hand-wound Brazilian rubber which is wrapped in thread and covered by two hardened goatskin covers. Each ball is produced by hand and costs about $100. It must be replaced every 15 minutes of play because it splits when it hits the front wall at high speeds. Because of the pelota’s hardness and speed, jai alai is an extremely dangerous sport that has killed several players.

The cesta. The baskets are made of reeds found in the Pyrenees and are tailored for each player. During the operation, the hand is put into a leather glove and held in place by a wraparound tie, or tape. Baskets are handwoven and take over 14 hours of labor to make one. They’re not cheap, either. Each Cesta costs over $100. Players own several and must constantly repair and replace them due to wear and tear.

Baskets really put a spin on the game-quite literally. It would be relatively easy for them to throw and catch a straight ball. Players, however, can put a tremendous amount of spin on the balls, making them less predictable and harder to catch.

The red areas on the wall are foul. Balls hit there are no longer playable. The foul area is made of a different material from the rest of the wall. It makes a distinctive sound when hit, which allows players, referees, and spectators to immediately identify a foul ball.

The cancha. Jai alai is played in a large three-walled court (front wall, left wall, and back wall) called the cancha. Courts vary in size, but they are typically about 176 feet long (double the size of a basketball court) and 40 feet wide. The screen protects spectators from stray balls as they watch the game on the open right side. As all courts have a wall on their left, all jai alai players must wear their baskets on their right hand. So lefties are out of luck.

Right along the right side of the court is a wooden out-of-bounds area called the contracancha. This area cannot be hit by a ball, but a player can stand or run in it to save a ball. Because granite is the only material strong enough to withstand the pelota’s impact, the front wall is made of granite.

Parallel lines divide the court horizontally across the court. Line 1 is closest to the front, and line 14 is farthest away.

In jai alai, scoring is very similar to racquetball. Each point starts off with a serve. Servers must bounce the ball behind the serving line (#11) and then hurl it toward the front wall. As soon as the ball hits the front wall, it must bounce between lines 4 and 7.

The teams then alternate catching the ball in their baskets and throwing it in one fluid motion without holding or juggling it. Judges determine whether a player catches and throws the ball in one motion.

The ball must be caught on the fly or after it bounces once on the floor.

Points are scored if an opposing player:

Jai alai games are played in a round-robin format, usually with eight teams of two players each (with one frontcourt and one backcourt player) or single players. It is the “post number” that appears on the front of the shirts of each team. For example, Team 1 plays Team 2 and the winner faces Team 3. The team that scores a point remains on the cancha while the losing team moves to the end of the line to await another turn on the court. Points usually double after the first round. A team that scores 7 or 9 points wins. The next highest score is awarded “place,” and third place is awarded “show.” In the event of a tie, playoffs are used.

Jai alai betting is similar to betting on horse racing or dog racing. You can place a single “win,” “place,” or “show” bet on one team or you can choose two teams to finish first and second with a “quinella” bet. Bets can also be placed on trifectas and superfectas.

The skill and agility of the players allow for some handicapping but the speed and tricky action of the pelota introduces an element of luck into the equation.