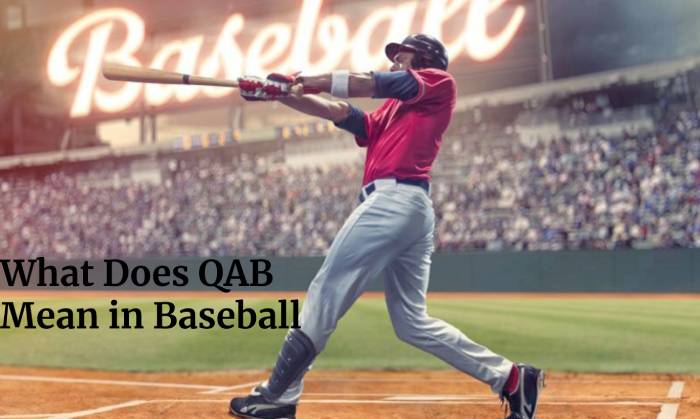 In today’s baseball, advanced metrics are used to measure numerous achievements. A pitcher’s WHIP, a player’s WAR, and a hitter’s OPS are just a few examples of baseball statistics. The stats calculate the effectiveness of an individual’s performance, not necessarily what they do to help a team achieve their goals.

Today, advanced stats dominate discussion of baseball players, but one metric is sometimes overlooked. When watching or playing baseball, you may or may not have heard about QAB. How does QAB work in baseball, what are examples, and what is the formula? Below you will find more information about this statistic.

What Does QAB Mean in Baseball?

What are Examples of a QAB in Baseball?

How Important are Quality at-Bats?

Any MLB team relies heavily on quality at-bats. It might not appear in the box score or highlight reel, but a QAB can make all the difference. We should consider an example of a QAB that is often overlooked.

Assume that a baseball game is tied 5-5 in the bottom of the sixth inning. Your hitter is up to bat with a runner on third base and one out. As the infield is playing back, any ground ball hit will automatically score the runner. Instead of making contact with the ball, the hitter swings as hard as possible and strikes out.

In the eleventh inning, the home team will have a runner in scoring position only once, and they will lose 6-5. Despite not being solely the fault of the hitter in the sixth inning for not recording a ground out to score a run, it’s still a common reason why teams lose games. A small ball play can sometimes be overlooked by players and coaches because they are obsessed with the big moment.

What is the Formula for QAB?

Let’s say, for example, that a batter has 80 plate appearances during a season. A combination of the items above led to 20 QAB moments for that player during that time. The hitter had a 25% QAB score for the season if we take the 20 QAB against the 80 plate appearances.

This data can be used to compare that 25% QAB to another player’s performance on a team. A baseball manager might have two players on the bench who can pinch-hit for the pitcher. Baseball managers might use QAB percentage to determine who has the best chance to drive in a run if there is a runner on third and one out.

Is QAB an Important Stat?

In constructing a team, QAB is just another metric that teams need to consider. As an example, Moneyball (the movie and the book) is obsessed with on-base percentage (OBP) as a metric for potential scoring. Money Ball constructed their squad based on metrics like QAB instead of home runs and slugging percentages. Ultimately, it comes down to what direction you want to take your team and if QAB is necessary.

Conclusion: What Does QAB Mean in Baseball?

The QAB metric is sometimes overlooked in the age of sabermetrics and individual player performance. Sac bunts and sac flies are often overlooked by players and teams when trying to win a game. In the end, even something as small as a sac bunt can make a big difference for a team later in the game, but it all depends on what they value and what their head coach believes is essential.