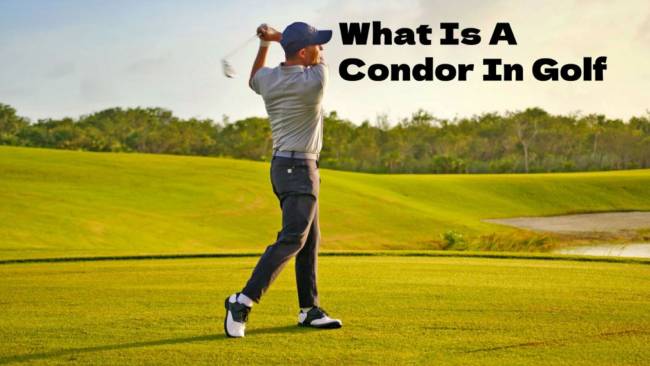 The people who made this shot are rare, so how do you go about attempting this shot? This is a complete breakdown of what a condor is in golf!

When Did the First Condor Occur?

The first official condor shot was taken by Larry Bruce in 1962. It was a 480-yard shot over the trees on the fifth hole that made the achievement possible. Hope Country Club is a golf course in Arkansas, USA, where this tournament was held.

Why is it Called a Condor Shot?

There are many terms for golf shots that come from the names of birds. There is a birdie shot, an eagle shot, and an albatross shot, for instance. Keeping with golf’s tradition of naming birds, a condor continues that tradition.

Has Anyone Hit a Condor Shot in the PGA / LPGA Tour?

There has never been a condor shot on the PGA tour or in the U.S. Championship. Nevertheless, amateur golfers have managed to achieve this rare shot on occasion. Condor shots on a golf course are so rare that experts give them at least a million to one chance of occurring. Those odds might even be higher!

How Many Times has a Condor Occur in Golf?

Only six cases of this feat have been confirmed and verified as of January 2022. In order of most recent to oldest, here is the list of official condors in golf.

How Do you Get a Condor in Golf?

Although luck is the primary reason you get a condor, there are still two ways to help you succeed. You have to cut over the dogleg on the golf course, which is risky because you need to get the ball over the trees without going too far past the hole. Secondly, you need a hill and or wind that can help move the ball into the hole from a roll or get help from a jet stream.

Can you Get an Up and Down and a Condor in One Shot?

You can score an up and down and a condor on the same shot. Getting the ball in the hole on your second shot is an up and down shot. Typically, golfers will drive the ball deep on the fairway from the tee and need only two strokes to put the ball into the hole. If the condor is a par 6, you can complete it in two strokes and get both accomplishments.

What Are Other Golf Shot Names to Know?

How Many Rounds of Golf Occur Each Year?

In the United States, 450 million rounds of golf are played each year, according to PGA.com. A hole in one occurs about once every 3.5k rounds. A condor shot is one in a million, which is mind-blowing when you think about it.

Conclusion: What is a Condor in Golf?

A condor shot is one of the rarest things you can hit in golf. According to the golf course, this has only been achieved six times as of January 2022. The chances of making a condor shot in golf are about one in a million.

There is a combination of skill and luck involved in condor shots. In most cases, you need to hit the ball over trees, have the wind on your side, and get a favorable bounce when the ball lands. You are extremely unlikely to find the ball in the hole even with a great shot that goes over the trees with the wind and bounces well. You are a part of golf history if you hear or witness this on the golf course.