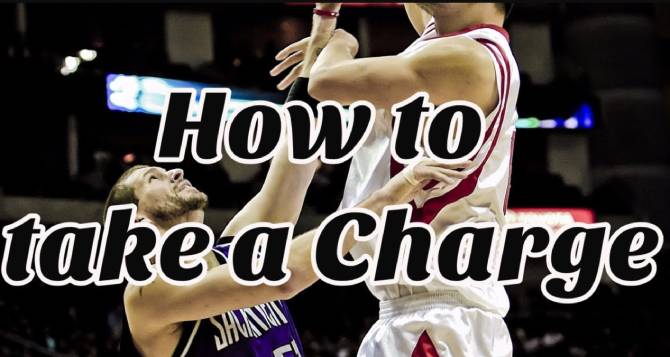 What is a Charge in Basketball?

How to Increase Your Chances of a Charge Call?

It is important for a defensive player to get a charge call when there is contact. You should fall immediately after making contact with the offensive player to get the referee’s attention. It is sometimes possible to boost the chances of a charge call by exhibiting some theatrics after a fall. It may work against you if you overdo the fall, as refs may assume you are flopping.

In spite of this, players should be aware of where their feet are when they take a potential foul. If you make contact with an offensive player during a shot, you will be penalized by an area on the court (a semicircle).

What is the Semicircle on the Basketball Court Under the Hoop?

For judging whether a collision under the net is a blocking foul or a charging foul, the semicircle underneath the net is crucial. The restricted zone, or restricted area, is a four-foot arc around the basket. Its purpose is to prevent secondary defenders on the basketball court from taking positions under the net and drawing charges on basketball moves like layups and slam dunks.

A referee may use instant replay to view a defender’s feet to determine whether a block/charge call was made during a game, according to the NBA rulebook. When a defender collides with a ball-handler with one foot on the semicircle, it can result in a defensive foul and free throws for the other team.

What is the Difference Between a Block and a Charge?

There are two different types of personal fouls in basketball that involve physical contact near the basket: blocking and charging. These are two sides of the same interaction. A charge occurs when an offensive player runs into a defender who has established a legal guarding position in the frontcourt.

In contrast, a block is the opposite of a charge. In other words, a block occurs when a player impedes an offensive player while dribbling the ball or attacking the net.

Tips for the Defender

Defendants should plant themselves outside of the restricted area, far enough away from an offensive player, in order to establish an excellent position to generate a charge call. In this situation, the offensive player has enough time to avoid them or change directions.

What Does the Referee Do to Signal a Charge Call?

A referee will point their arm at the other end of the court when a charge occurs. Now that the play is going the other way, the defensive team is in a better position.

What Happens After a Charge Call in Basketball?

When the referee signals a charge call, two things happen. Firstly, the offensive player who made the charge gets a foul added to their line. To foul out of a game in the NBA, you need six fouls, while in college basketball you need five.

On the charging play, there is an immediate turnover. The defense team now gets the ball and has a chance to score. For one team, receiving a charge call during the final seconds of a game can be a huge momentum swing.

Who are the Best NBA Players at Drawing Charges?

NBA players who can cleanly draw charging calls are some of the best when it comes to effective defense. Your team can stop a player from scoring by taking advantage of the charge rule.

There was a three-way tie among players who led the league in charges drawn in 2021-2020. There were 22 charges drawn that year against Blake Griffin of the Brooklyn Nets, Kemba Walker of the Oklahoma City Thunder, and Montrezl Harrell of the Los Angeles Lakers.

Are Referees Bad at Calling Charges?

Some fans may criticize refs if they miss a charge or mistake a block for a charge. Basketball players who flop or throw themselves on the court after contact can aggravate the situation. These plays can be more difficult for refs to judge if there is significant contact.

The NBA does not currently allow referees to review blocking and charging calls using instant replay. Typically, referees use the tape to determine the legality of a contact by observing the defender’s feet. Calls can be clarified and made more accurate, but missed calls cannot be compensated for.

Conclusion: What is a Charge in Basketball?

In basketball, the charging rule protects players on the court. Limiting unnecessary contact in high-traffic areas encourages players to shoot or pass the ball to make spectacular plays. Passing or shooting the ball makes the game more exciting for fans as well.

As with blocking fouls, this play occurs when a defensive player interferes or blocks an offensive player. Fans must understand these rules in order to stay on top of them during fast-paced games!