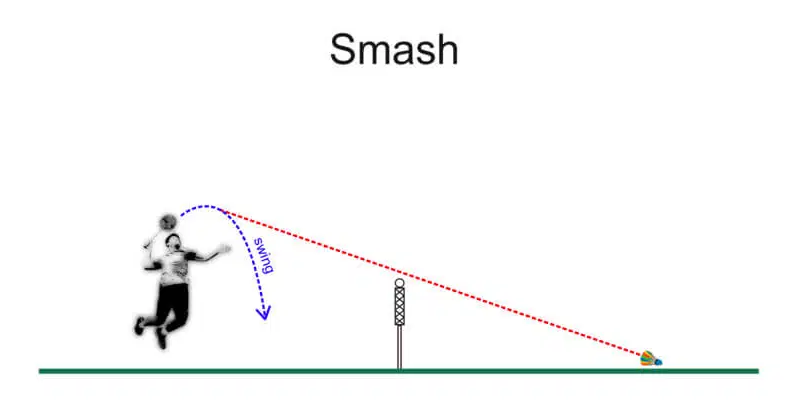 What Is a Smash Shot in Badminton? A smash shot in badminton is an offensive shot performed from the back part of the court. This shot has a downward and straight trajectory, aimed at your opponent’s middle court.

What is a smash shot in badminton? The in-depth answer

According to my previous explanation, a smash shot in badminton is an offensive shot that is typically hit at the back of the court with a downward trajectory. It lands in the center of the other player’s court.

The trajectory is downwards because this is an offensive shot so the main goal is for the shuttle to reach the floor as fast as possible.

The trajectory is straight because smashes are the fastest badminton shot. As a result, the shuttle does not have time to slow down too much and do the more standard curved trajectory.

The landing is usually in the center of the court because the shuttle travels very fast and straight. Because the net is in the middle, it cannot land closer to the net than that. In the image above this is very clear.

The badminton smash is the most offensive of the badminton shots. In doubles, it is the default shot whenever you are in an attacking formation. On the other hand, in singles, it is used more sparingly, whenever the player sees an opportunity to finish the rally or wants to put pressure on the opponent.

In the following sections, we will explore a bit more about what types of smash can be found in badminton. We will also see when you should use a smash shot in badminton and where you should direct it to.

What are the different types of smash in badminton?

The smash in badminton can be divided into four main types of the smash:

The forehand standard smash is the most typical smash that you can find. It is a smash done with a forehand grip, on the racket side of the body.

Depending on how high the shuttle is when you hit it, the trajectory will be more or less steep. The higher you manage to hit it, the more angle you can give it and the more difficult it will be for your opponent to return it.

The backhand standard smash is the least typical smash you can find. It is a smash done with a backhand grip, on the non-racket side of the body.

It is the least typical because it is extremely difficult to perform. Backhand shots are usually the weakest spot for all players because it is very difficult to get enough power. Since power in smash is a critical component, backhand smashes are not widely used.

In this shot, the idea is the same as the forehand standard smash, with the difference that the shuttle is on the other side of the body. Therefore, your racket will go over your head in order to hit the shuttle.

The jump smash is a smash done with a forehand grip, on the racket side of the body. The difference with the forehand standard smash is that to perform a jump smash, the player jumps and hits the shuttle while in the air.

This shot is performed in order to hit the shuttle higher up and be able to give a steeper angle to the trajectory.

When to smash in badminton?

When to smash in singles?

In singles, smashing should be used strategically and carefully. It is a very important skill to have, but it can also backfire if you do not use it properly. Even though it depends on your specific skills and those of your opponent, there is one general rule.

You should use smash in badminton only whenever you see an opportunity to finish the rally or create an advantage. This is because you are in a comfortable position that will allow you to return fast to the center point after hitting the shuttle.

If you don’t follow this rule, the smash can easily backfire. Let me explain it with an example. If you reach the back of the court a bit forced and try to hit a smash from there, two things will happen.

First, because you are in a forced position, you will not be able to put as much power and precision into the smash. As a result, your smash will be weaker and less accurate.

Second, because you are in a forced position, it will take you a bit longer to get back to the center of the court. Because you hit a smash, the shuttle will arrive at your opponent’s court very fast and, if your opponent manages to return it, you will have a very short time to reach it. Being in a forced position makes it more likely that you will not be able to reach it.

When to smash in doubles?

In doubles, the story is very different. According to our post about badminton tactics, the key to a successful doubles match is to have and keep the initiative. As a result, the smash serves a different purpose here. Along with being used to finish the points, it also serves as a tool to keep the initiative going.

So, in doubles, you should be smashing whenever you are at the back of the court and the shuttle is high enough that you will manage to give it a downward trajectory.

It is less significant if you are in a forced position or not since you have a partner covering the court with you. In doubles, it is critical that the trajectory is steep enough so that your opponents have a hard time returning the shuttle comfortably enough. This will enable them to gain the initiative.

So, in doubles, smash whenever you can because the critical thing is to always be attacking.

Where to smash in badminton?

Now that we know what a smash is and when you should be using it, it is time to check where to send the shuttle.

In summary, we know that the trajectory should be downwards, but we haven’t discussed where you should direct it along the width of the court.

For singles, if you are positioned in one of the back corners, you should smash mostly straight to the side lines. This is the safest choice because it gives your opponent less time to react and it leaves the shuttle closer to your location.

However, diagonal smashes need to be part of the mix. Otherwise, your opponent will move the base point a bit more towards the parallel side and will have an easier time returning your smash.

You need to be careful with this, though. Smashing diagonally leaves a lot of empty court to your opponent. If your opponent manages to block your smash and return it straight, it will be on the other side of the court. This will mean you could easily lose the initiative of the rally.

Another good location to smash is in the center of the court, between your two opponents. Because both opponents can hit the shuttle in that area, it can become a point of conflict, and you can gain an advantage from that.

If you are in one of the corners, however, it is always safer to smash straight. Smashing diagonals in doubles is even more dangerous than in singles. Therefore, it should be done only in very rare circumstances where, for whatever reason, you might see a big advantage by choosing that shot.