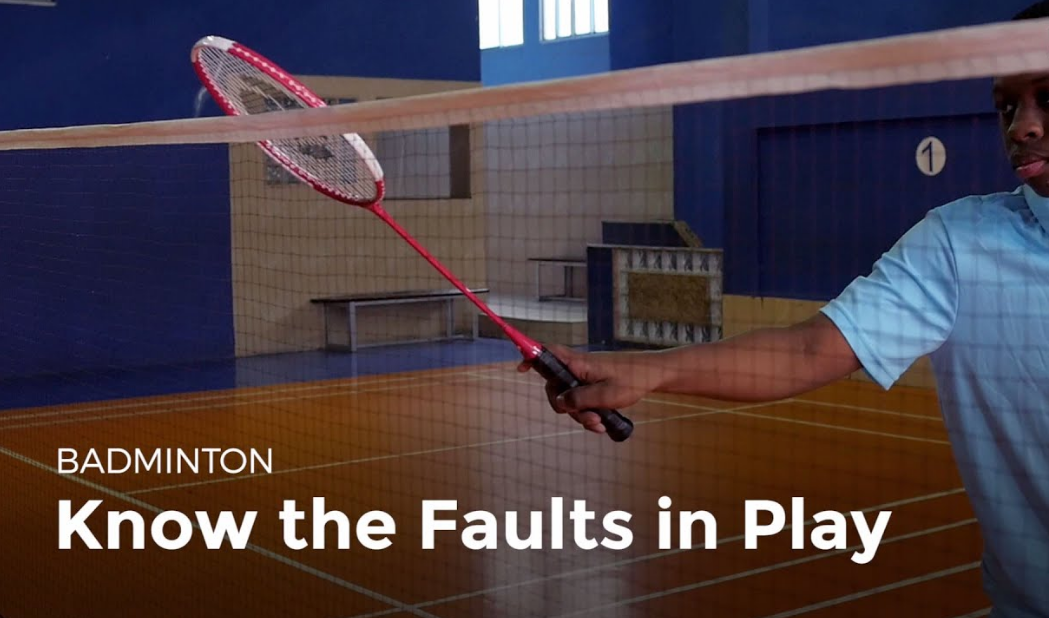 What is a Fault in Badminton? Badminton is pretty easy to start playing (especially if you follow our quick starter guides for singles or doubles), but after a bit while of playing, you’ll probably want to make sure you’re not breaking any rules.

In this post, we’ll look over the topmost common faults that we see in amateur (and even professional) play. Don’t make these mistakes next time you play badminton!

What is a Fault in Badminton?

To define a fault in badminton in one sentence refers to an action that provides a point to your opponent if you perform it during a match.

In badminton, the BWF defines many violations in its rule book, but here are the most common ones that take place in a match.

Striking the Shuttle Too High During Service

It is mandatory for players to serve below 1.15 meters (3.77 feet) when they serve. However, hitting the shuttle from a higher altitude is quite easy and common. Professional players usually try to push the boundaries of badminton to gain the biggest advantage possible. Serving from a higher height enables players to get a better angle on their short serves, decreasing the time it takes the shuttle to cross the net.

There are dedicated service judges in professional matches, however, amateur games usually do not – making it difficult to judge if a player served too high or not. Perhaps an easier way to determine this is to use the old badminton service rules, where a service is considered a fault if it is above the player’s waist. This is defined as the player’s lowest rib. Either way, make sure you practice your serve and get feedback from a friend to make sure you’re serving legally. It may make others unhappy even if you’re not called out for this mistake.

A double hit occurs when players from the same team hit the shuttle successively before it goes back over the net. It usually happens in doubles when a player barely misses the shuttle but brushes it instead, allowing the back player to hit it. When this happens, the shuttle typically wobbles or changes paths even with a slight touch.

The bottom line is that you can only hit the shuttle once before it flies back over the net. This ain’t volleyball.

Hitting the Shuttle Before it Crosses the Net

Before the shuttle crosses the net, players are not allowed to hit the shuttle. Players do not have to wait for the entire shuttle to cross the net before hitting it. As long as the point of contact is on their side of the court, it is legal. In fact, the follow-through of a hit can go over the net, just not the initial point of contact.
In case you are wondering, if the opponent interrupts the follow-through (for instance, by putting their racket in the way), it is the opponent’s fault.

Racket Pointing Up During Service

Rackets must be pointing in a downward direction when the shuttle is struck. It cannot be flat either. What this means is that only underhand serves are allowed. This fault is surprisingly common in doubles since players often try to get the shuttle heading in a downward direction in a short service. Striking the shuttle with the racket in a flat or upwards orientation makes it much easier, but is illegal. Watch out for this in your games and make sure you’re not doing this!

Nets can only be touched by the shuttle. Anything else, like your body, racket, clothes, hair, etc is not permitted to touch the net and is considered a fault. You are, however, allowed to be near or under, or over the net as long as you do not interfere with your opponent’s gameplay, such as during a follow-through for a net kill. After striking the shuttle, a player’s foot is usually under the net and the racket crosses the net after striking it. As long as the player does not touch the net and the shuttle is past the net at the time of contact, it isn’t a fault.

It is not considered a fault to touch the net after a rally has ended. The rally is officially over as soon as the shuttle touches the ground. While doing a kill, players may run into the net, but if the shuttle lands before the player touches the net, there is no fault.

Moving Before the Service

Badminton hits must be made “immediately” and cannot be held on the racket before being slung back to the other side. Since this can be interpreted in different ways, it’s a bit of a grey area. Shots in badminton happen very quickly, so even having your racket in contact with the shuttle for a full second is likely a carry. You’ll have to use your judgment to determine faults here. Generally, shots should be a single, fluid motion with a distinct point of contact on the string bed.

Touching the Shuttle with Your Body

The shuttle cannot touch any part of your body, clothes, or hair. The problem is similar to the one about not touching the net. Rackets and racket strings are the only objects that can touch the shuttle. It used to be a fault to hit the shuttle with your racket frame but was made legal in 1963. When the racket frames were made of wood, it was called a wood shot.

The BWF’s Laws of Badminton prescribe that the server’s racket must first contact the shuttle’s base. Therefore, you cannot initially hit the shuttle’s feathers. As a result of the so-called “S serve” (named after the legendary Sidek brothers of Malaysia), it was implemented. It is a technique where the feathers of the shuttle are struck first to make it spin wildly and therefore difficult for the opponent to return. Due to its effectiveness, there is now a rule to prevent feathers from being struck first.

Here’s how it looks like. Don’t try it in actual games since it’s illegal.

It is a fault to use multiple starts/stop motions during service. Serves should always be made in a continuous forward motion. In amateur games, it is somewhat common for players to try to fool opponents by using multiple movements or motions to indicate when or how they will serve. This is obviously against the rules.

This rule is included in the BWF’s Laws of Badminton, but in a somewhat confusing manner and as a combination of several rules. Here are those related to this rule: