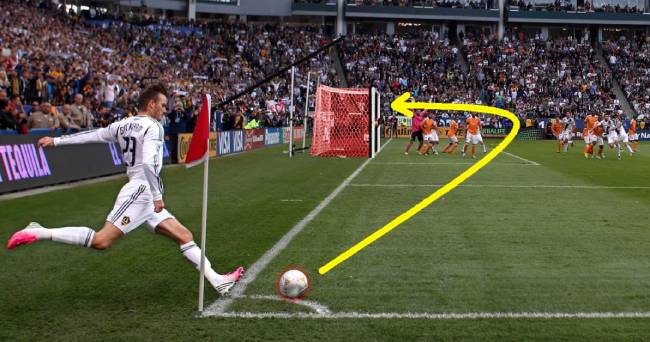 What are the Rules of a Corner Kick?

A corner kick occurs when a soccer ball goes out of bounds after passing the goal line, which was last touched by a defender. Any player can take the kick in the nearest corner of where the ball went out, but they cannot touch it again until another player touches it. There must be at least 10 yards between all defenders and the kick.

The defending team receives a free kick if the corner taker touches the ball again before another player does. Offsides won’t be awarded to attacking players who make contact with the ball on a corner kick.

What if you Kick the Ball into Your Own Goal via a Corner Kick?

During a corner kick, a kicker cannot score if the soccer ball goes through their own goalposts. If this occurs, a new corner kick is taken by the opposing team to resume play. If it occurs during a match, it will be extremely rare.

How Successful are Corner Kick Goals in Soccer?

Who Has the Most Corner Kick Goals without an Assist?

ŞÜkrü Gülesin has the most direct corner kicks going into a goal with 32. From 1940 to 1955, Ükrü Gülesin played for the Turkish national team. It is called an Olympic goal or Olimpcio if it is scored directly from a corner kick without anyone touching it.

When you kick the ball towards the goal area, you should plan to curve its trajectory. You should angle your kick using the inside of your foot to curve the ball. The right foot kicker should be on the left side of the corner of the pitch, and vice versa.

By kicking through the ball with this angle, you create air time for the ball to reach a teammate or increase a scoring opportunity via a header or kick. Furthermore, once you kick the ball, you cannot kick it again until another player touches it.

What is a Short Corner Kick?

In addition to kicking the soccer ball towards the opposing team’s goalie, you can also take a short kick from the corner area. Overlaps are popular short corner kicks. The kicker passes the ball to their teammate, who can either give it back to the original kicker or take it themselves. To set up an offensive play, a short corner kick is a great way to pull a defender away from the goalkeeper.

How to Play Offense on a Corner Kick

How to Defend against the Corner Kick

On the soccer field, the defending team must stay at least ten yards away from corner kicks. To prevent players from having a clear shot on goal, most teams line up a wall of defenders ten yards from the kicker. Players can also be moved around the pitch so that they are stacked near the goal or evenly spaced out.

What is the Difference Between a Corner Kick and a Throw-In?

What is the Difference Between a Corner Kick and a Penalty Kick?

A penalty kick is awarded when the defending team causes a foul within its own penalty area. There are two types of fouls: contact and handball. During a penalty kick, an offensive player kicks the ball in front of the goal, and all players must position themselves outside the penalty area.

A corner kick occurs when a defender kicks the soccer ball out of bounds after it crosses the goal line. This play has no foul, so the offensive player kicks the ball from the corner arch to resume play.

Is a Corner Kick a Direct Kick?

During a soccer match, a corner kick is a direct kick.

How Many Corners are there on the Pitch?

Corner kicks can be taken from any of the four corners of the field. Each side of the field has two corner arches.

How Often Do Corner Kicks Occur in a Match?

There are about ten corner kicks in Premier League games, according to The Punters Page.

Conclusion: What is a Corner Kick in Soccer?

Essentially, a corner kick occurs when a defending team player last touches the ball after it crosses the goal line. There are only around 1.5% of Olympic goals that are successful. It is rare for teams to place the ball towards their teammates during a corner kick. Corner kicks are usually not counted by a referee because they take longer to take. It is possible however, if a player takes ample time before finally kicking the ball.