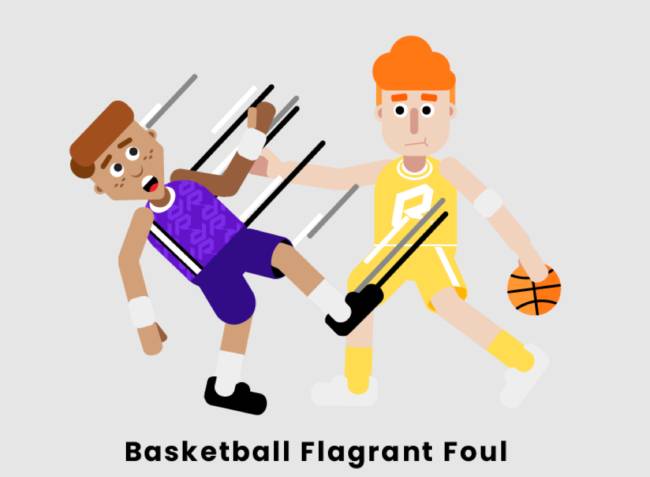 Basketball’s flagrant fouls are some of the most severe. A player is usually expelled from the game after egregious acts of violence or physical contact that cause an injury. Listed below are the different fouls in basketball, their categorization, what happens next, and more.

What are The Different Fouls in Basketball?

Technical fouls and personal fouls are the two main types of fouls in the NBA rulebook. In general, these fouls differ based on whether they involve contact with another player or official.

Contact between two players on opposing teams always constitutes a personal foul. An unnecessary charge or screen can knock your opponent hard to the ground. A flagrant foul is a type of personal foul.

How are Flagrant Fouls Categorized in the NBA?

There are two types of flagrant fouls in the NBA and other leagues: flagrant one fouls and flagrant two fouls. Even though the names and criteria are often the same, the penalties differ significantly. When deciding whether a personal foul is flagrant one or flagrant two, officials must use instant replay.

One flagrant foul consists of unnecessary, illegal contact that could unintentionally harm another player. Players who receive one flagrant foul do not receive an ejection. They will, however, be if they get two in a single game. In addition to receiving two free throws, the fouled player also receives the ball.

Contact intended to harm a player is often penalized as a flagrant foul 2. This is why they are sometimes called intentional fouls. As with flagrant foul 1, these penalties result in two free throws and possession of the ball for the team that was fouled. When a player commits a flagrant two foul, he is automatically ejected from the game.

What Happens if a Player Gets Too Many Flagrant Fouls?

The 2016 NBA postseason saw Draymond Green sit out a game after he received three flagrant fouls. In game four, Green earned his third foul after a verbal altercation with LeBron James. As a result of his third foul, he sat out game 5, which helped the Cleveland Cavaliers avoid elimination and beat the Golden State Warriors in seven games.

What Players Have the Most Fouls in History?

A player’s career technical fouls or personal fouls are usually recorded in NBA statistics. Flagrant fouls are a type of personal foul, so it’s best to use that metric to see which players have committed the most infractions.

Nowadays, it’s unlikely that many players will have as many fouls as their predecessors did. As a result of NBA rules, players are discouraged from getting too many fouls in a season.

The career total of 317 technical fouls Rasheed Wallace garnered during his career is indicative of his tendency to get many technical fouls. In 2000-2001, the NBA established a rule that suspended any player who had more than 15 technical fouls in a season.

Conclusion: What is a Flagrant Foul in Basketball

In recent years, some critics of the NBA believe that the game has become soft. The flagrant foul is often used as an example of how weak the sport has become. The rule protects players from injury, which keeps the best talent on the court. Fans and the game benefit from keeping the best players on the court.

What makes a flagrant foul in basketball?

Flagrant fouls – penalty (1), or FF1 – are called when a player interferes with his opponent physically in an unnecessary manner. When that unnecessary contact is excessive and continues, it is called a flagrant foul.

Do you get ejected for a flagrant?

The flagrant fouls are reviewed by the referee. In a game, a player who commits two Flagrant 1 fouls is ejected. As a result of the foul, the fouled team receives two free throws and retains possession of the ball. During the first round of the 2022 NBA Playoffs, here is an example of a Flagrant 1 foul.