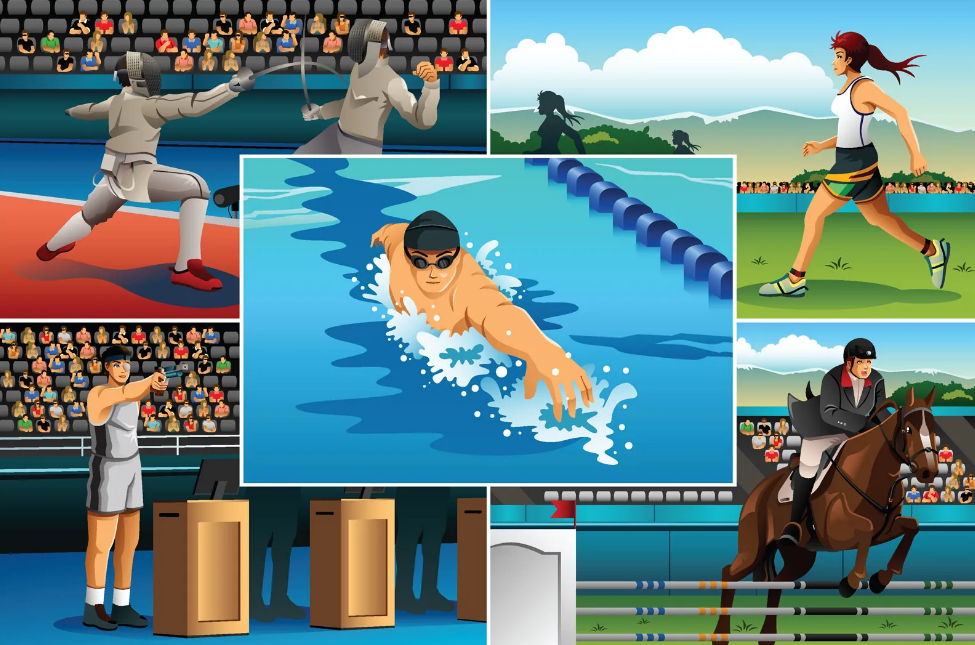 Pentathlon combines five very different skill sets into one physically and mentally demanding competition. This event was introduced at the modern Olympic Games in Sweden in 1912 by Baron de Coubertin. A French legend inspired the event, which included fencing, swimming, horse riding, pistol shooting, and running.

Since then, the modern pentathlon has appeared in the Summer Olympic Games with some changes along the way. In particular, the Laser-Run combines running and pistol shooting into one thrilling and deciding event.

The sport of modern pentathlon has been evolving for thousands of years. In ancient Greece, the pentathlon was the most anticipated event of the Olympic Games. The event consisted of the following 5 disciplines: running, jumping, wrestling, discus, and a form of javelin. It is said, however, that a French soldier delivered a message over a considerable distance in the 1800s. In order to accomplish this, he rode a horse, fought with a sword, swam, ran, and used a gun. The modern pentathlon was born from this legend.

Due to the sport’s unique combination of events, the modern pentathlon cannot be played on a single area. In fact, all 5 disciplines of the sport require their own area or setting.

Since the modern pentathlon is an individual sport, there aren’t really specific roles and positions for athletes. In 1996, however, the modern pentathlon was no longer available as a team sport. The only difference between the types of roles is the events that the athletes compete in, which require very different skills and training. The roles include fencing, swimming, horse-riding, shooting, and running.

In the modern pentathlon, each of the 5 disciplines has its own set of rules that must be complied with by all athletes competing. It’s pretty obvious that some of the guidelines for the events are self-explanatory, but others aren’t quite so obvious.

First, in epée fencing, swords may not have a curve longer than 1cm, and fencers may only strike after the command for play and before the command for a halt. Any violation results in a penalty.

The starter dive underwater can last no more than 15m, then the swimmer must surface above the water.

There is a dress code for the equestrian event.

Additionally, in the laser run, athletes must shoot their own target and may not start running before meeting the minimum shooting time.

Since the modern pentathlon features 5 separate disciplines as 4 entirely different events, applying smart technique and being skillful is vital to succeeding in the sport. First and foremost, the sport calls for excellent stamina and tremendous mental and physical strength. The combination of events can be grueling and exhausting, as they only take place on one day. Being able to excel in your strongest events requires the right amount of effort. Some may benefit from taking their time to ensure proper form in one event. This will enable them to flourish and dominate in an event where they are more confident.

A modern pentathlon challenges athletes with multiple disciplines to test their strength, endurance, stamina, and skill. In the modern pentathlon, the first three events determine your head start or time behind the leader for the laser run. So, in the first three events, athletes focus on doing what they can to get the highest cumulative score they can. If an athlete is particularly skilled in the laser-run, then they have some room for mistakes or taking it slower in the seeding events. In contrast, if an athlete has troubleshooting or running, he or she must make sure to excel in the first three events in order to make up for the crucial laser run.

DrillsTraining for the modern pentathlon is no simple routine. With essentially 5 different sports combined into one, modern pentathletes must have a training program like no other. There are different drills and training methodologies that can be useful for mastering the sport.

For fencing, you should practice footwork and mentality. It is also important to be able to move on from losses since there are so many bouts during the fencing event. In running and swimming, endurance is key and training is pretty straightforward. To swim better, swim a lot, and to run faster, run a lot (but not too much). Finally, to improve your equestrian skills, practice riding with unfamiliar horses. This is probably the trickiest part of the event, as you only get 20 minutes to prepare with a horse you have never seen before.

The modern pentathlon used to be the pinnacle of the ancient Olympic Games. However, the unique sport made its modern comeback at the 1912 Olympic Games in Stockholm, Sweden. In the majority of its Olympic presence, the events took place over 4 to 5 days, giving athletes considerable rest between events.

After 1980, all 5 events have taken place in just a single day. This has made the sport much more exciting for the spectators and challenging for the sport’s top athletes. In the 2012 London Olympics, the laser pistol was introduced to the Laser-Run event. This creates a safer and more environmentally friendly alternative to lead bullets.