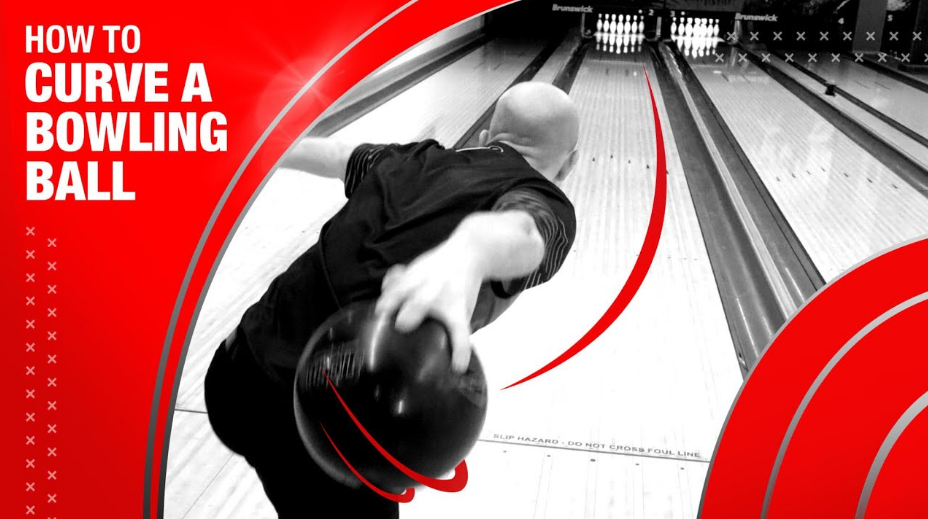 How to Curve a Bowling Ball? Sure it’s possible to get strikes by throwing straight balls down the middle of a bowling lane. However, when you know how to curve a bowling ball you will be able to get way more strikes and be able to throw them much more consistently.

There’s a reason for this too.

General physics dictates that a straight ball that hits the pocket will strike only if it hits perfectly in the exact same high flush spot (near the 18.5 board) with almost no margin or error. Your ball will deflect less if the weight is 15 or 16 pounds so lighter balls are less able to strike reliably with a straight shot.

Most of the time if you are extremely accurate you can get close to a strike-throwing a straight ball but to have an area and increase the size of your pocket you need to have some entry angle. The angle of 2-degrees entering the 1-3 pocket will offset a lot of the deflection and result in a much higher strike percentage.

Various studies in the bowling world have concluded that for optimal carry percentage a 4-6 degree entry angle into the pocket is the gold standard and your best bet at maximizing your strike percentage – this angle of entry will result in a strike more often than not but the only way to get to the pocket with an angle of that size (relative to the boards) is to hook the ball.

With this size of an entry angle, you will most likely strike if your ball gets fully into the roll phase. This will enable you to hit the headpin while sitting on the 17 board, which is approximately 3.5 inches away from the middle of the headpin.

No matter how far left or right you stand on the lane, a straight ball will never get to the pocket with any more than a 1-degree angle.

The lane is a lot longer than it looks from the foul line.

In fact, the length of the lane plays major tricks on the eye. If you were to draw a 5-degree angle from the 18.5 board 1-3 pocket to the gutter the line would cross into the gutter around the 40-foot mark.

A 3-degree angle coming out of the pocket would come back to around the 25-foot mark. The only way to achieve these angles is to throw the ball down at least halfway down the lane and then make the ball hook towards the pocket.

This is achieved by rotating the axis of rotation of the ball. It’s like throwing an underhanded football spiral except with a much heavier and larger ball that you can’t palm.

Despite that, hooking the ball isn’t actually all that complicated or difficult to do.

It may take years to become really good at it like the pros or top amateurs in the world. It may take hundreds or thousands of games to hook the ball consistently at the same speed and rev rate. It may require a lot of practice to learn how to do it while shooting the ball in the right direction every time.

At the basic level though learning how to throw a small hook is easily within the grasp of anyone who wants to throw one. It really can be learned at the rudimentary level fairly quickly and with only minimal practice.

Of course, if you want to get good, you’ll need hundreds or thousands of games under your belt. However, learning a basic hook shouldn’t take more than a single night.

Let’s dive into the basics. Later in this post, we’ll go into the details on how to do it better and get more consistent and powerful with your hook.

The Easiest Way to Learn to Throw A Hook

Before we look at advanced techniques let’s first learn the most basic form of a hook and try to understand how it works.

When you hold a bowling ball and lightly swing it as if you were going to throw the ball you should note that your palm will be facing the pins with your thumb near the top of the ball and the fingers underneath.

The thumb will always exit the ball first followed by the fingers. As the ball rolls off the thumb, the fingers will push the ball into a mild roll even if you don’t want it to. This is just the way things are.

This release is how a ball rolls end over end down the lane and flies straight. Add a decent arm swing and you add momentum to the shot and the ball rolls somewhat fast.

If you were to swing your arm straight and release like this the thumb would exit the ball first and then the ball would roll off your fingers in the direction of your body.

Your arm swing would provide the momentum to propel the ball straight down the lane and the rotation of the ball would shift dramatically to the left (axis rotation).

Again, even if the ball does not rotate much off your fingers, the axis rotation as it compares to the direction of the path of the ball will result in a hook. The more revs off your fingers you have, the higher the hook potential will be.

This is what is called suitcase delivery. It is a basic way to get a hook without having to do much if any hand or wrist manipulation at the release point.

It’s also a very limited hook. No matter how much you practice the suitcase delivery you will never achieve a high rev rate because your hand is located on the top of the ball at release. From this position there is no way to exploit leverage on the ball – there is no way to make the ball rotate faster off your hand.

The best way to make this ball hook more powerful is to turn your hand clockwise. This will ensure that your thumb is on top of the ball and your fingers are down the outside portion of the ball.

It’s what I call the chicken wing delivery. This is because most people who practice this for any length of time end up with an arm swing that forces their elbow into a slightly bent position. This is way out on the side of their body.

You will definitely increase your revenue over the suitcase delivery method with this method. However, it is still limited in potential and usually causes problems with aiming. It also limits your ball’s speed. Basically, it’s a bit better than the suitcase delivery but far from an optimal release.

You will see that simply swinging the arm with the fingers on the outside of the ball and the thumb near the top and inside of the ball will result in a small hook with very small effort.

You will probably also see that without rotating the wrist your rev rate will almost never get very high which will greatly limit your potential hook size and shape.

Next, we’ll go into improvements that will increase your hook size, shape, and strength.